"Elephant tied to a stick"

Jayes Gallery is proud to present new works from an exciting and young emerging artist, James Seymour. James is a Bathurst artist who is currently studying Fine Arts at the National Art School in Darlinghurst, Sydney. James works primarily in the fields of printmaking and painting. “Elephant tied to a Stick” is his third solo exhibition, following “Cross Your Fingers” in 2010 and “Big Smoke” in 2009.

“Elephant tied to a stick” is a series of works exploring the ideas of conditioning on societal and personal levels, the restrictions we impose on ourselves (consciously or unconsciously) either to fulfil a social profile, or out of habitual fear, preventing us from reaching our full potential.
The title of this series of works “Elephant tied to a Stick” refers to a story of a circus elephant, raised in captivity with one of its legs tethered to a small stick in the ground. When the elephant was a baby the stick was strong enough to stop him from escaping, it held him there his whole life.
By the time he came of age it was obvious to anyone that the massive animal could easily pull it from the ground, but he never did. The trainers said it was because when the elephant was young he learned that the restraint was immovable, though he grew strong and old, the idea of the stick remained. 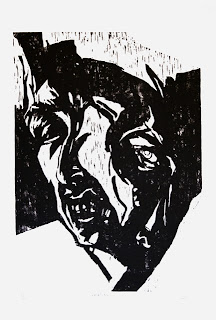 We invite you to join us and meet with the artist in Gallery 1 to learn more about James and his work on Sunday afternoon, 13th March 2011 at 2 pm. This will be an afternoon to enjoy!


"The Living Landscape" by Georgia Mansur draws o a close on 6 March so don't miss out! This has proven to be a most popular show with many people coming through the gallery to take a look at it! Georgia is a strong artist with a broad range of styles and a wide palette of colours . She draws on her skills to create large dramatic landscapes from regional Australia. 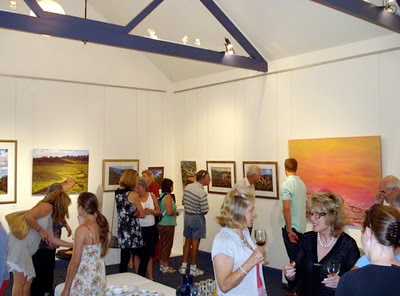 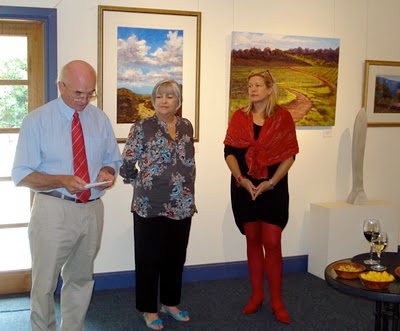 L to R: Mayor Dowling, Libby Oldham, Director and Artist, Georgia Mansur
Mayor for Cabonne Country, Bob Dowling opened Georgia's show on Sunday 13 February describing his personal favourite from the show along with paying tribute to the cultural contribution that Jayes Gallery makes to the Molong community.
Libby Oldham, the Director was recently included along with several Sydney galleries and Regional galleries in a Speed Dating Event for regional artists to explore opportunities to exhibit and advance their career as artists.
Posted by A note from the Director at 6:47 PM No comments: Links to this post