Setting up for 3 new shows for Spring!

It's always interesting to get new works through the gallery and a changeover from one show to another. This time though, we have a number of sculptures appearing for our sculpture event. These 3D artworks are adding a new dimension everywhere we look. They sit nicely with the works of Watson in the main gallery and work well with the theme of her work. We particularly like this sculpture by Norman Organ set against the cool canvas inspired by grassfire. 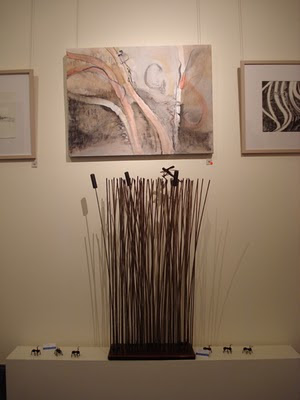 Out in the garden, 'Glimpse of the Moon' and 'Glimpse of the Rising Sun' invite you to stop and caress the smooth marble and granite surfaces of these two flames of stone which stand like sentinels, silent, watching. 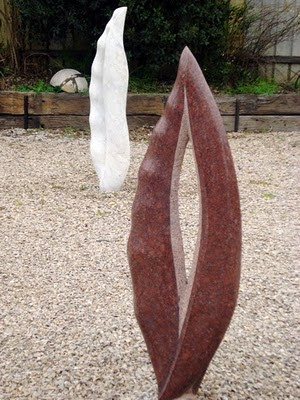 New works from lively and much admired artists, Ada Clark and Melissa Barber will open along with Sculptures in the Spring on Saturday 18 September at 6.30 pm.

But  hurry as these are the last of Melissa's Poppy paintings....

The latest exhibition of renowned Canowindra artist Melissa Barber celebrates the finale of the original celebrated Poppies Series that quickly became her trademark within the Central West and soon after came to Canberra’s attention in 2004 at the Aarwun Gallery. Deeply influenced by Japanese and Chinese art for their use of negative space versus detail, flat colour and strong use of golds and silvers, Barber’s portrayal of poppies reflects an aesthetically decorative, yet spiritually meditative response to nature. This final Poppies exhibition features recent works and new works from the series. It also includes works that  reflect the artistic development of the Poppies into the latest series Glisten.

We'll see you then!
Posted by A note from the Director at 8:38 PM